Introducing our 10th car, Aurora. Aurora borrows her name from our first car KA Borealis R, which is named after the northern lights, or Aurora Borealis as it is known in Latin. We have chosen to name our 10th car after our first since we would be where we are today without our humble start.Aurora is also a game-changer when it comes to autonomous driving.

This is our first car design to both compete in driver and driverless competition. This ambitious step comes with a lot of challenges. The goal is to create an autonomous vehicle that does not compromise on the driver competition.

A new monocoque has also been introduced this year, for the first time since 2018. The new monocoque will embrace the challenge of having a fast driverless car. It makes room for new sensors and actuators without compromising on aerodynamics and structure. 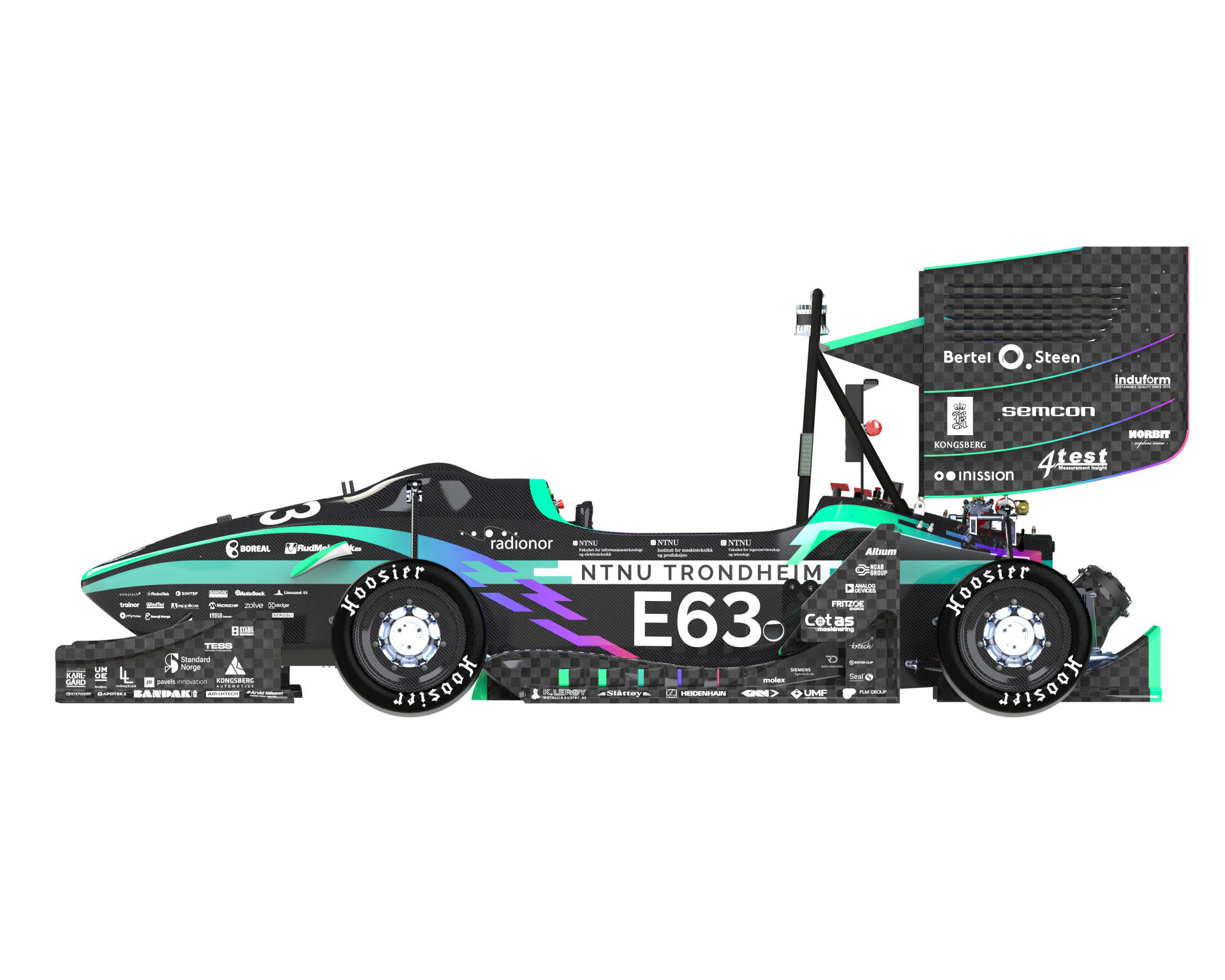 Luna is our seventh electrical race car, and the fifth that is four wheels driven with an electrical motor in each wheel. The car has a top speed of 117 km/h, and it weighs only 157.5 kg marking the first time we broke under 160kg.

This year, we have changed for a smaller tire. This results in having to package all of the motor inside the wheel. We call this concept in-wheel. The in-wheel concept required a new design of the upright, how the motors where mounted and the dynamics of the vehicle. From the side of the vehicle one can barely see the motor sticking out.
This was also the first year we design our own rims in carbon fiber. This results in a lighter rim that is stronger than the previous years rims. Moreover, the custom design of the rims results in a better adaption of the mounting points for the hub.

On the electrical side we have a new battery management system. We used a dual core microcontroller with an FPGA for the PCB. This results in more flexibility for developing a state of charge and state of health algorithm, which is planned as future development. 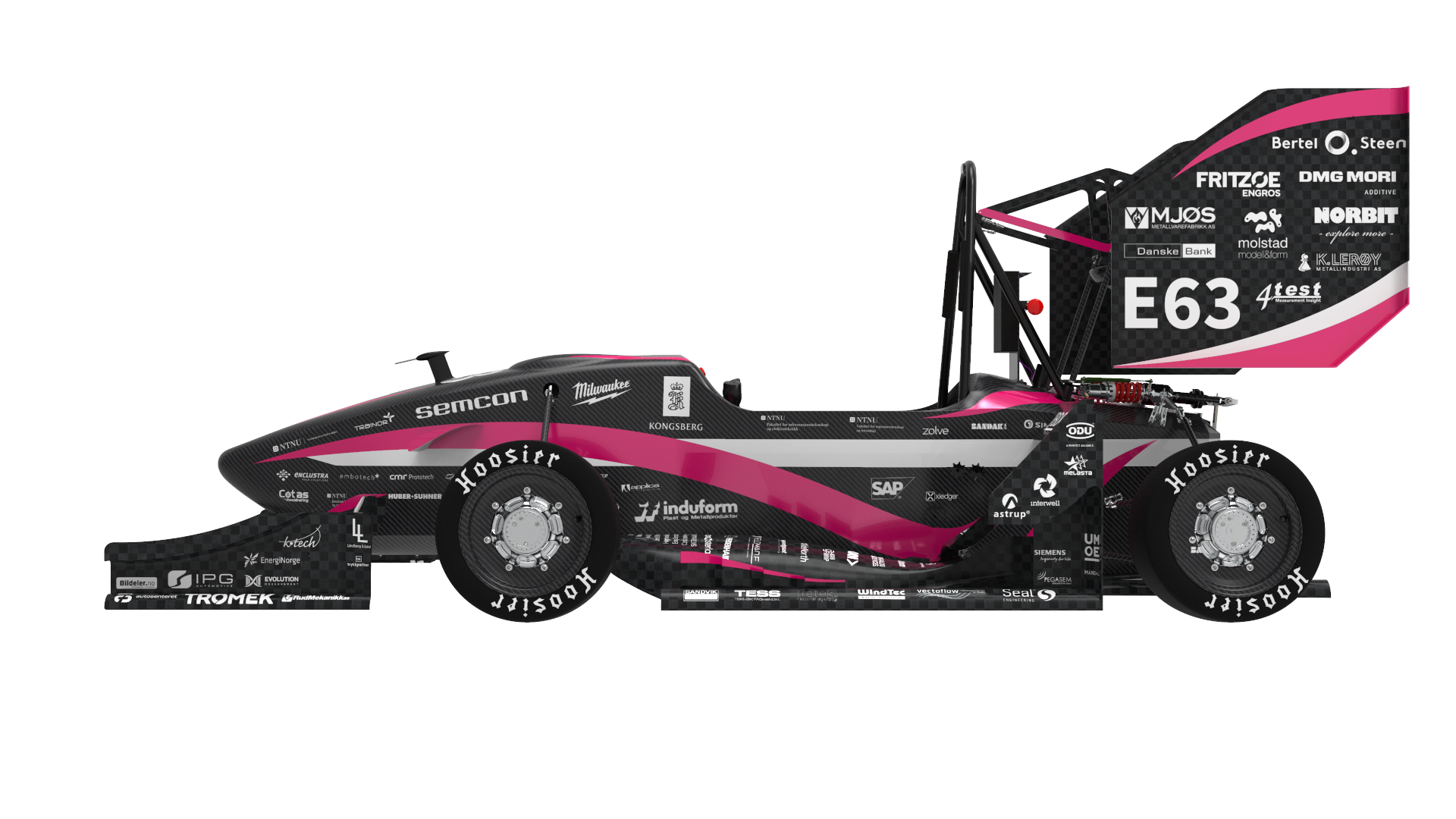 Nova is our sixth electrical race car, and the fourth that is four wheels driven with an electrical motor in each wheel. The car has a top speed of 115 km/h, and it weighs only 162.5 kg which is a reduction of 20 kg from last year.

This year, we will for the first time ever drive with self developed, electrical motors! This has led to more flexibility in how we make the parts in the wheel interact, and of course learning a lot along the way. This has enabled us to make an even more compact gearbox, and we were able to reduce the weight by 15% which is 3 kg. We have also increased power with 22% and increased the top speed from 110 km/h to 115 km/h.

Revolve NTNU has a long history of developing our own inverters. The alternative is to buy commercially available inverters, but these are bigger, heavier and harder to troubleshoot. At full speed, the inverters and the motors are able to produce a force equivalent of lifting 500 kg straight up in the air, and the driver experiences to be pushed back in the seat with double his own weight. To make this happen, the inverter has to convert the direct current from the battery to alternating current. We use 24 SiCMOS transistors to make this work, and they each open and close 12 000 times per second. If only one of them miss with less than 700 billion parts of a second, then the consequences are catastrophical. This tells about the precision required to control the inverters without even mentioning the heavy theory behind. The inverter project has lasted for over four years, eight students have dedicated a year of their life in which three of them have written a master thesis on the matter. This is without even mentioning all the competance and funds we have gotten from external partners. We are proud to say that this year we have a working self-built inverter. 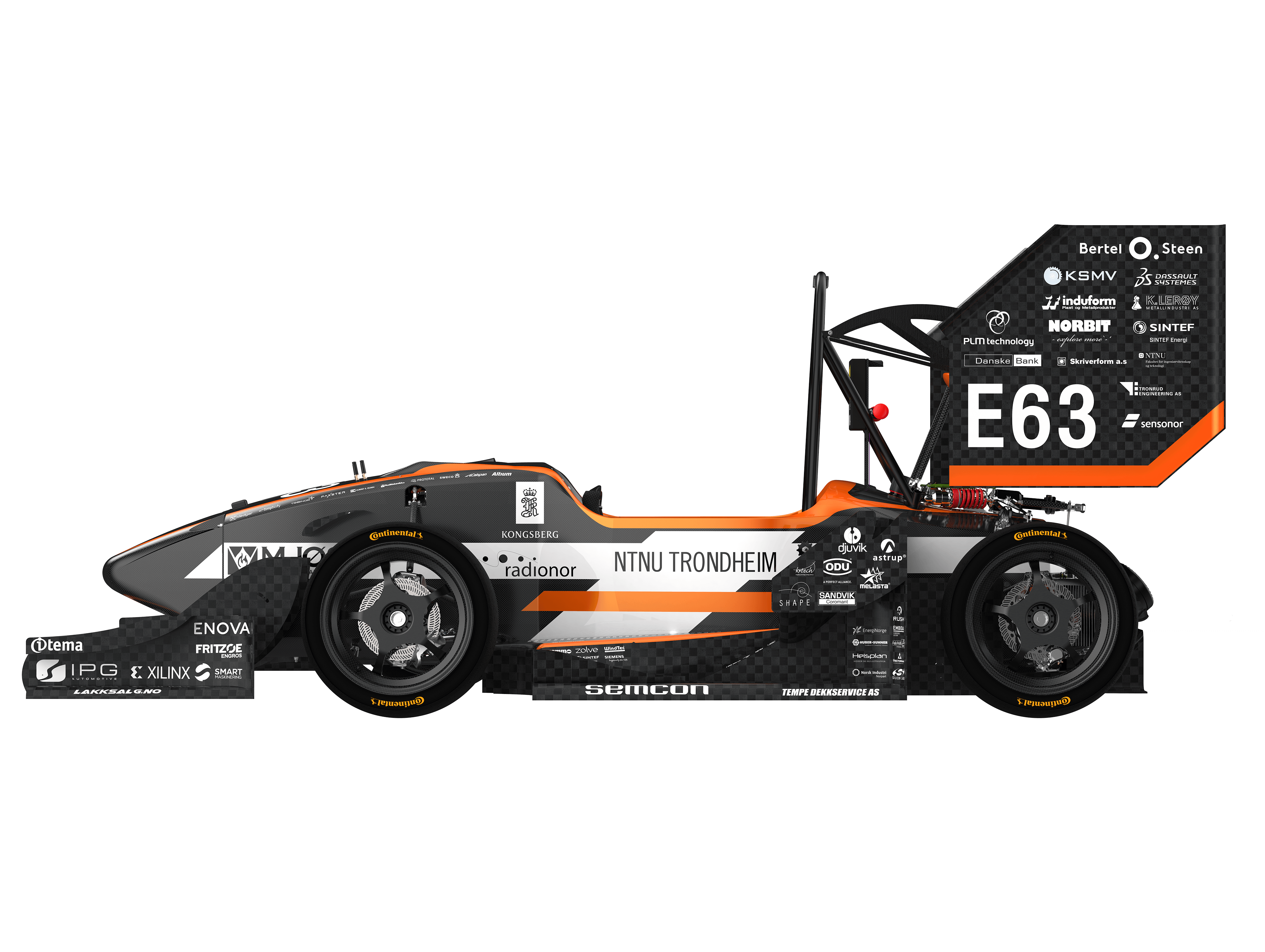 ATMOS Driverless, our second generation autonomous vehicle reached its potential during the season reaching both the goal of doing 5 m/s on Autocross and 10 m/s on Trackdrive. With the help of two LiDAR’s and a camera, the car is able to navigate itself. In total, we process more than 39 million pixles from the camera every second. That is about the same as 20 TV-screens. The two LiDAR’s on our car compliment each other, and accumulates over 1.6 million points each second. To find the right path, the car makes calculations about around 50 000 possible paths each second, and chooses the right one based on probability. This pipeline going from raw data to action runs at 15 Hz and that with a processing unit which is 70% smaller than last year.The driverless project in Revolve NTNU needs primarily three things. Firstly, it needs a car that is reliable and works both mechanically and electrically. This includes the competence to be able to fix the car if something happens to it. Second, you need code to make the car, based on the surroundings, make choices about where to drive. So far we have more than 65 000 lines of code, which approximates to the number of words there are in the whole trilogy of Lord of the Rings. Lastly, and maybe most importantly, you need dedicated people who are willing to put down the efforts necessary. Greeting from the ATMOS DV Team! 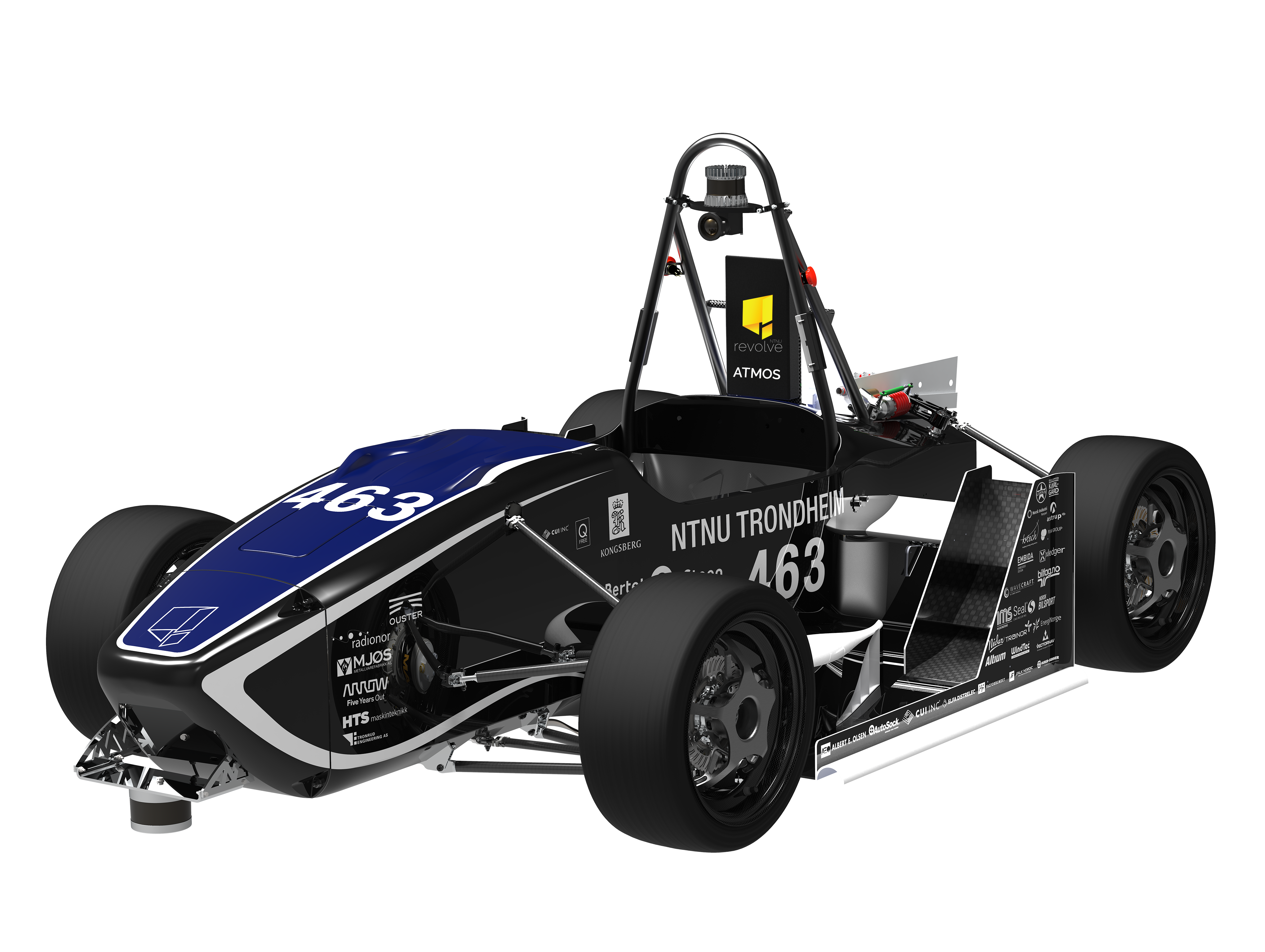 Atmos is the third generation four-wheel driven, electrical race car developed, and produced by Revolve NTNU. A new monocoque design with a rearwards inclination in the floor has opened for an aerodynamic undertray and diffuser, achieving a 30% increase in downforce. To compensate for an increase in downforce, the suspension is fitted with a 3rd spring, to stabilize the chassis in heave/pitch movement.


In addition to the 325 sensors used in last years vehicle, Atmos is equipped with hub-mounted accelerometers, IR temperature sensors and a new inertial navigation system. One of the focus areas of the year have been to provide more information about the vehicle and information of higher quality. It is used in the advanced torque vectoring algorithm, and to validate the performance of Atmos. We have also upgraded our telemetry to include driver communication, and live transmission of HD-video. This is used as a visual aid for driver-training. 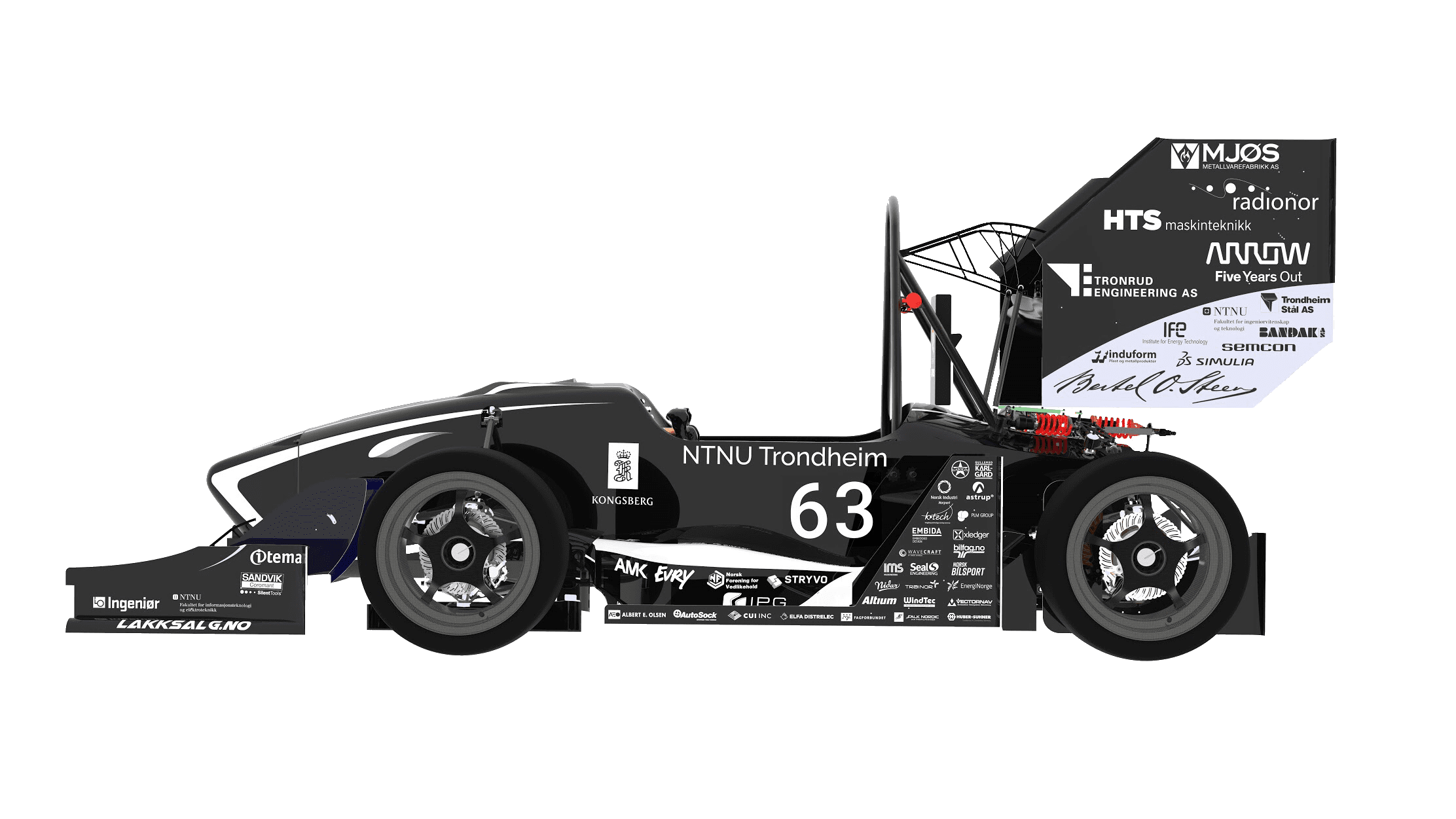 Revolve NTNU decided early to join the new challenge of driverless and followed closely as the first FSD competition was held in 2017. The 20 members on the driverless team have been working hard to place Trondheim on the map of autonomous racing, resulting in a solid system based on the combination of Machine Learning and classical AI. It was Eld, our 2017 car that was chosen as our very first driverless vehicle. It now has actuators for control, an Emergency Brake System, an Nvidia Drive PX2 Auto Chauffeur for processing and severaly new sensors for the autonomous system. A Velodyne VLP-16 in the front gives us a point cloud, while two FLIR color cameras in the main hoop make it possible to classify the cones with color and size.We have developed two separate autonomous systems, both an end-to-end machine learning system and a full driving pipeline. For detection we use cone-detection combining LiDAR and camera with the MNIST classifier and use YOLOv3 as a redundant system. Furthermore, Eld uses a graphSLAM-variant for location and mapping, and trackfinder using triangulation and circles. Model Predictive Contouring Control with a FORCES solver is used for high-speed driving. To facilitate early testing we used a 1/7 scale Traxxas race car and Gazebo for simulation. 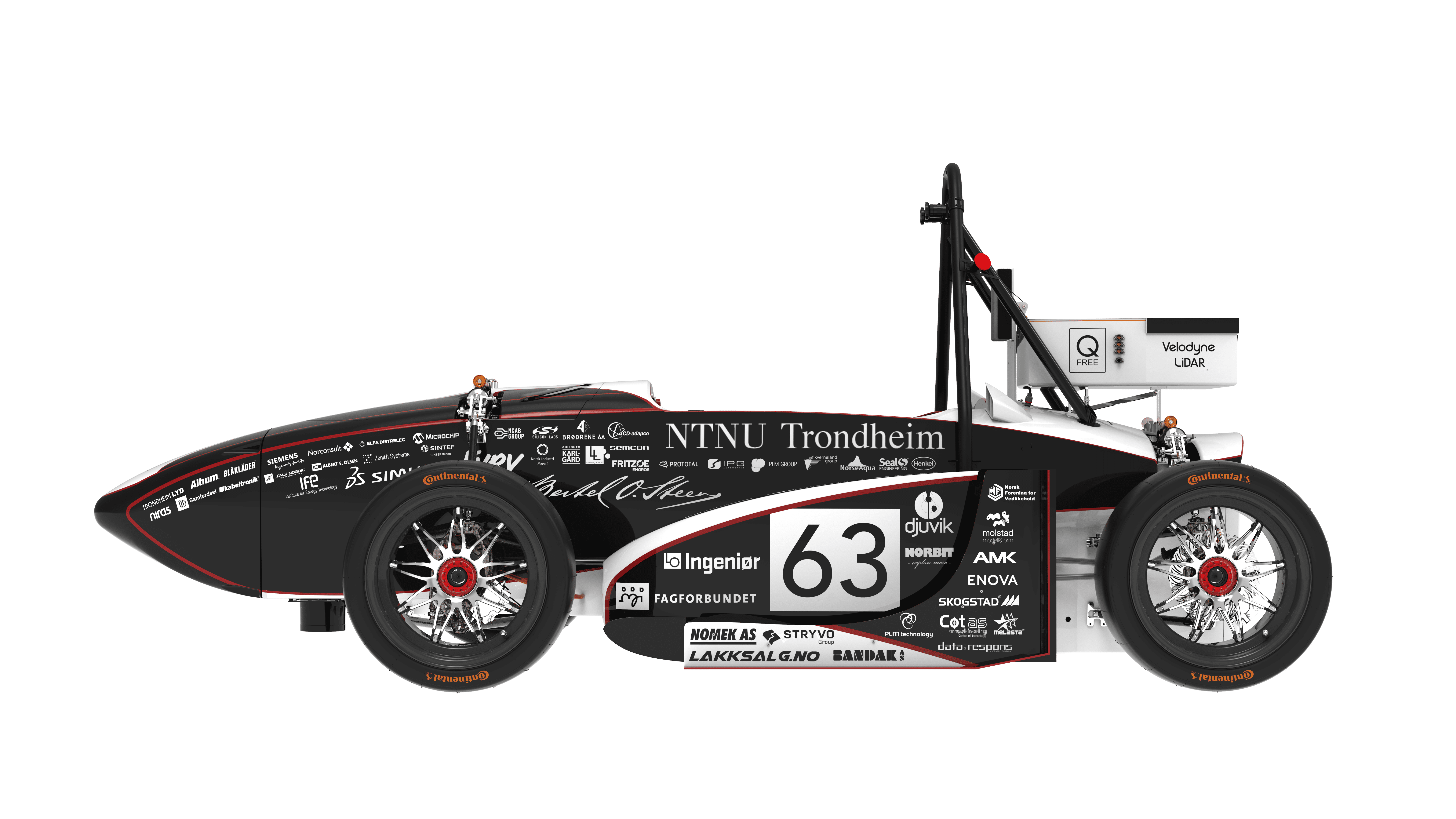 Eld is our second four-wheel drive electric race car. The car is based on many of the same features as our previous race car, Gnist, but designed to be even better than its predecessor. By focusing on reducing weight, we managed to shave off 7 kg. We used the same mould for our monocoque, but the aero package was revamped, resulting in a downforce of 610N at 60 km/h. Both the monocoque and the aero package are made of carbon fiber and produced in-house. We also changed the upright design to get an even stiffer and lighter upright for maximum performance. Eld consists of 66 in-house designed and produced circuit boards and 325 sensors. Our program Revolve Analyze is used to receive and use data from the sensors. Revolve Analyze is an in-house data solution for visualizing and interpreting sensor data through telemetry from the car. Furthermore, we made significant changes to our torque vectoring system to help the car stick to the track during dynamic events. 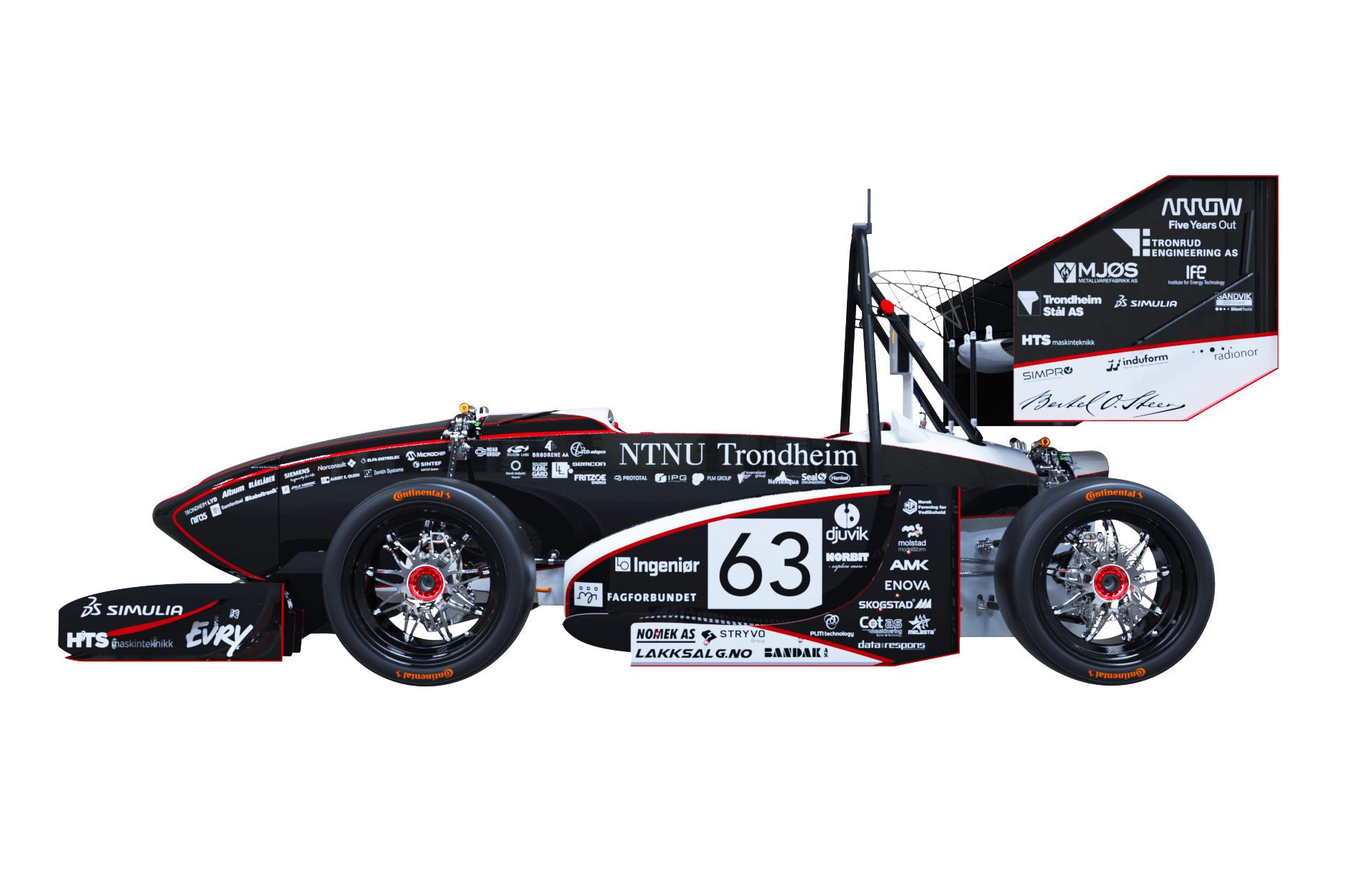 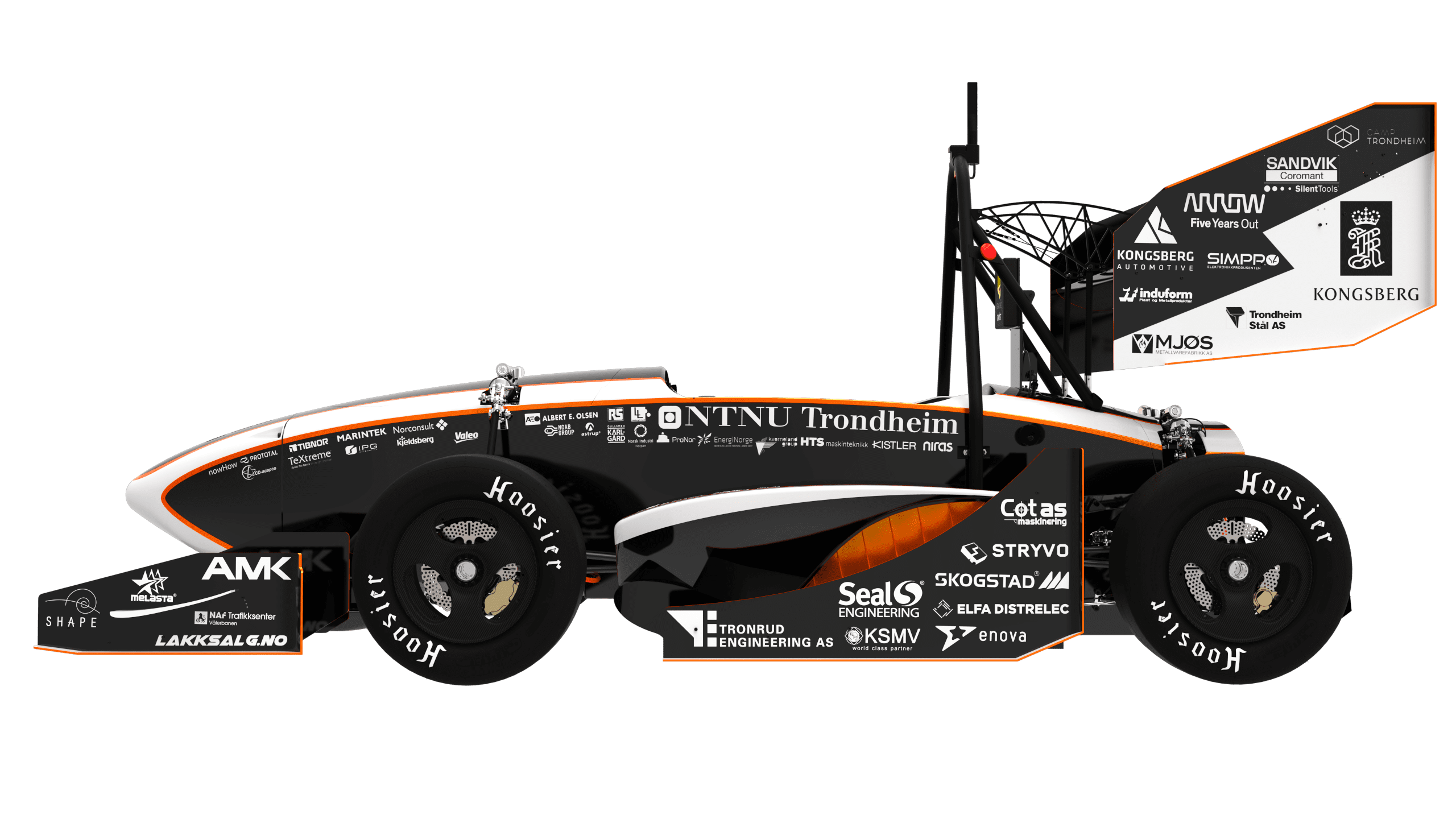 Vilje is the second electric car by Revolve NTNU, and is a complete redesign from the KOG Arctos R. Even after the extensive weight reduction last year, the weight of Vilje was reduced by another 10 kg to just 175 kg. The drivetrain is based on the Emrax 228 electric motor with an in-house developed inverter and accumulator. All electronics were developed in-house, including the battery management system, motor control and inertia measurement unit. The aerodynamics package went through a complete redesign and features an undertray and rear diffusers in addition to the front and rear wings. A two-piece monocoque design was made for the chassis and a hydrophobic nano technology paint job weighing just 260 grams was applied. For 2015 our telemetry software Revolve Analyze was completely reworked from the ground up to enable more efficient and systematic testing and driver feedback.

KOG Arctos R is the the third car developed by Revolve NTNU, and also Norway’s first electric race car. The car features an fully electric drivetrain and a carbon fiber monocoque, resulting in a weight loss of 65 kg compared to its predecessor KA Aquilo R. KOG Arctos R was designed from the bottom up, with an overall focus on reducing weight and at the same time introducing more power through the electric motor. The car has an extensive aerodynamics package creating a massive 140 kg of downforce at 80 km/h. The battery package for the car was designed in-house, delivering 7,6 kWh of energy and weighing in at 46 kg. Other innovations include a self-designed motor control unit, carbon fiber rims and driveshaft and titanium laser sintered uprights.

KA Aquilo R was the second car developed by Revolve NTNU. The car had the same basic concept as the 2012 car, but introduced a wide variety of new systems, solutions and improvements. The innovations on the car include a full aero package, adaptive suspension, continuous variable air intake and a CAN-bus electronic system. The car was awarded National Instruments Measurement and Control Award for the electronic system and control systems at FSUK.

KA Borealis R was the first car developed by Revolve NTNU. The car features a tubular space frame, carbon fiber body and a Suzuki GSX-R 600 engine. The car was awarded Best Newcomer Award at Formula Student UK in 2012 and finished in a strong 17th out of over hundred international teams. Further on the car set a standard for Revolve NTNU in terms of design and quality of finish which has been kept by the team ever since.